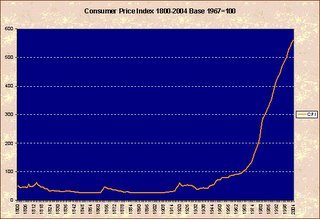 I think it was Voltaire who noted that paper money always returns to its intrinsic value. Money created out of thin air, as every dollar, euro, yen, franc and mark in the world are now created, must eventually return to the value of thin air. This graph shows the Consumer Price Index since 1800. Any technical analyst will tell you that when graphps approach the vertical, as this one is doing, they tend to reverse in a symetrical pattern.

Recent years have seen falling prices for everything that the government can’t regulate or create an artificial shortage for. Electronics, clothing, and tools are excellent examples.

In industries where there is considerable regulation but less than a regulatory choke hold, automobiles for instance, product value has increased while prices held fairly steady. Price inreases certainly haven’t matched inflation figures.

Where government is most active, medical care, education, public "services" like government inspectors and regulators, prices have exploded. That’s because government has isolated those areas of the economy from market forces.

The relatively unregulated, some would say giddy, real estate balloon cannot be insulated from the inevitable return of common sense and rising interest rates. Prices there are doomed to follow the vanishing money
supply. In fact, mortgage loan defaults will greatly exacerbate a shrinking money supply and crashing prices.

The world on the dollar standard creates money by entering loans on the books of banks. There are only two possible fates for those loans. Either they are repaid, thus removing them and the money they represent from existence. Or they are not repaid, with exactly the same result. When lenders write off loans the money created when the loan was made vanishes just as it does when it is repaid.

The only way to avoid the inevitable deflation is to borrow ever larger sums to keep the supply of money growing. While governments may be willing and able to borrow without limit against future generations, at some point consumers must stop.

Will government be able to borrow heavily enough to keep the party going for both itself and consumers? Only time will tell. But the Fed’s recent decision to stop publicizing the figure that represents the total number of dollars in the world, M3, probably indicates they are going to give it a try.

It might be a good idea to lay aside a bit of the barbaric relic for when they do.