In a triumph of murderous Muslim piety over free expression Borders and Waldenbooks have refused to carry the most recent issue of Free Inquiry magazine because it cotains an article on Muslim political cartoons. Such cartoons have often sent the more pious of the Prophet Muhammed’s followers off on murderous rampages.

In support of freedom and to see if I can generate any death threats or rampages in my neighborhood I offer you a sample of my favorite Christian/Muslim cartoon, Jesus and Mo. It’s linked to the source, where you will find many more. 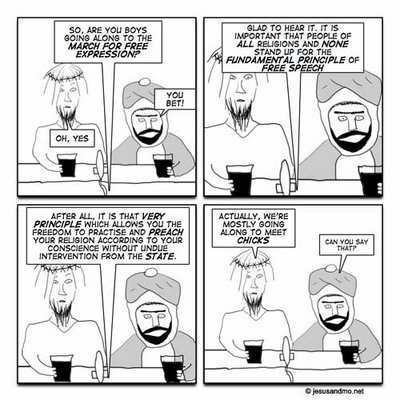 On the Net:
Free Inquiry
The Borders Group