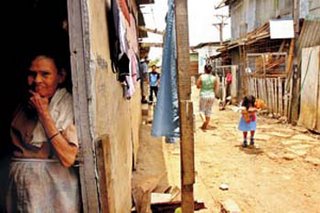 “Gap Grows Between Rich, Poor” hollered the headline from last week’s Tico Times. It could have said "Costa Rican Income Doubles" if the editors had chosen to see the glass half full. Despite the headline, the report contained a lot of good news.

Costa Rica is richer than it was in 1988. Other things being equal, prosperity is good. Poverty is bad. Once you get used to them, clean water, electricity and refrigeration are not luxuries.

The Tico Times led with the bad news, however. The poorest fifth of the population was not any better off than it was 15 years ago. That is bad news indeed, for everyone but politicians. It’s the kind of bad news that manures the rolling fields of envy and resentment where socialists harvest their votes. Over 50 years of socialism in this country and the poor are still dirt poor. The government must need more money.

Not surprisingly, Costa Rica’s socialist president, Abel Pacheco, quickly suggested just that. If he could just mow down the tallest plants in that field he could end poverty and corruption and fill the pot holes. But everybody here knows, after tossing a few clippings down to the have-nots, the mowers themselves consume most of the harvest.

Socialism has a powerful philosophical appeal and an attractive, if larcenous, logic. It also features a deliciously ironic paradox. Despite wide agreement that theft is immoral, electing a thief who promises to split his loot with those who elect him delivers both the voters and the thief to unassailable moral high ground.

The idea of soaking the rich to help the poor supports political bureaucracies all over the globe. Democracy is held in such reverence that the morality of three lions and a zebra voting on what’s for dinner is never questioned. Garden-variety socialists believe that taking wealth from those who produce it and giving it to those who vote for it makes the world a better place.

And if brilliant, incorruptible angels administered socialist governments the world would surely improve. Unfortunately, governments are run by politicians and their camp followers — people who have no credible claim to superior intelligence, competence or character.

This group is the political class. It neither sows nor reaps. It lives on wealth taxed away from the productive economy. Few members have the remotest idea of how wealth is produced, but all know where their bread is buttered.

Success in the private sector depends on hard work, innovation, productivity, and, ultimately, giving good value to customers. Success in the political economy depends on lording it over as many people as possible, sucking up to the powerful and transferring loot from foes to friends. The widespread faith that players in the political economy can or even want to improve the world is one of life’s great mysteries.

The political class thrives in the fertile valley between the rich and the poor. The wider the gap the greater is the opportunity to leap to the controls of the rumbling bulldozer of social democracy. That is why the political class, despite loudly deploring the growing gulf between haves and have-nots, can only widen it.

To understand how this is so we must understand how people get rich. Keynesian hoo haw about the “paradox of thrift” aside, you can’t spend yourself rich. Borrowing money to buy stuff you don’t need may provide years of riotous fun, but it’s like burning the furniture to heat your living room. Eventually you’ll be sitting on the floor, shivering in the dark.

To become richer, people and nations must produce more than they consume. They must then wisely invest the difference to increase productivity. Investments in tools, machinery or research produce more wealth. A man with a shovel can earn more than a guy digging with his bare hands. A man with a backhoe can earn more still. The added productivity is the return on the savings invested in the tools.

Socialist governments take money from productive members of society but they do not invest it. They consume it or give it to others who consume it. At the same time, by inflating the currency, they quietly confiscate society’s savings. The confiscation hurts the poorest the most.

Costa Rica routinely devalue their currency by 10% to 20% a year. If you are making $500 a month, which would be a big raise for the poorest families here, anything you save will be confiscated through inflation. You will never accumulate the capital necessary to escape your poverty. The government that claims to work for your benefit conspires to keep you poor and dependent.

At the same time, the wealth siphoned off the productive economy will never be invested in the factory or machinery that could provide you with a better, more productive job. It will be squandered in “administrative costs” or used to buy votes.

Governments can increase the prosperity of their people. They can do it by providing a stable, honest currency, by protecting the rights of every citizen and by keeping down the number of freeloaders on the gravy train. Everything else government does just adds to the load the productive economy must bear and keeps the poorest very poor indeed. The gap between rich and poor will never be closed by filling it with politicians and paper pushers.