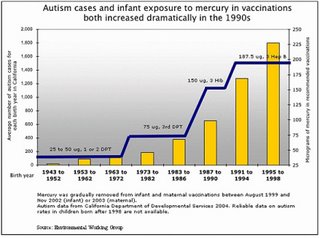 To a crime investigator a coincidence is a clue. Scientists on the other hand assume that clues are only coincidences until proven by experiment.

The rule in science is that correlation does not prove cause. Clearly it doesn’t. For example, we cannot decide that because all scientists drank milk as babies that drinking milk as a baby causes people to become scientists.

Similarly, as U.S. Center for Disease Control (CDC) insists, we cannot assume that autism is caused by childhood inoculations simply because the incidence of autism has risen in lockstep with the increase in compulsory vaccinations. CDC scientists maintain that until research proves otherwise, the correlation between autism and vaccinations is just a coincidence. (see chart)

Autism is a poorly understood neurological disorder whose symptoms mimic those of mercury poisoning. Science has long known that mercury is a powerful neurotoxin in even tiny amounts. It is an interesting coincidence that until just recently all vaccines given to children in the

contained mercury-based preservative called Thimerosal. It has been banned in European vaccines for years. It has been ruled unfit for use in veterinary medicines.

The history of compulsory mass inoculation is full of interesting coincidences. For instance, there was a coincidental increase in the rate of polio after the first mass polio vaccinations. In some states polio rates went up several hundred percent after mass inoculations. The U.S. Public Health Service (PHS), predecessor to the CDC, called it a coincidence.

The PHS declared the polio vaccine safe and effective even after doctors from the National Institutes of Health called it “worthless as a preventative and dangerous to take.” Coincidentally, many doctors refused to give the vaccine to their own children and many local health departments refused to use it. In another interesting coincidence, the PHS clinically redefined polio causing an automatic drop in reported cases.

Coincidentally, in 1976 the inventor of the vaccine, Dr. Jonas Salk, said he believed that most if not every case of polio in the

since 1961 had been caused by the vaccine. His vaccine was used until 2000 in the

In 1991 the Center for Disease Control (CDC) increased the number of compulsory vaccinations from six to twenty-two. Coincidentally, in the next 10 years there was an explosion in the rate of autism. Roughly 1 in 160 American children are autistic today. Before the 90’s that figure was one in 2500. Before the first mass inoculations in the 1930’s the disease was unknown. The CDC insists the correlation is just a coincidence.

There is disagreement about the safe amount of mercury that can be injected into a child. But the cumulative amount of mercury administered to children who get all the currently recommended vaccinations is many times what even government agencies consider safe. Coincidentally, the symptoms of autism and mercury poisoning are identical.

The CDC held a conference in 1999 to examine possible links between mercury in vaccines and autism. A single sentence summarizes the report, “…the number of dose related relationships are linear and statistically significant.” Stripped of the scientific jargon, that means the greater the number of mercury laced shots children get the greater the number of neurological problems they have. The CDC’s own records show the correlation.

Coincidentally, CDC scientists did not move to remove Thimerosal from vaccines immediately. Instead they coincidentally marked the report of the conference “Confidential, Do Not Copy.”  They released it after losing a Freedom of Information Act lawsuit. Coincidentally one of the doctors mentioned in the report that his newborn grandson would be receiving only Thimerosal free vaccines. The same doctor, in fact all the doctors, had no problem with your grandchildren receiving the other kind.

A sudden drop in autism rates after a ban on Thimerosal would have been an embarrassing coincidence. An immediate ban would have cost drug companies millions. The CDC continues to insist publicly there is not enough data to prove that the autism epidemic is the result of compulsory poisoning. Its own data shows otherwise.

A few years after the conference, Thimerosal had gradually disappeared from most, but not all vaccines. The CDC allowed mercury laced vaccines to continue to be used until their expiration dates. The CDC ruled that vaccines containing mercury were just fine for export. Influenza vaccines for infants and tetanus shots for older kids still contain mercury.

Coincidentally, autism rates have fallen steadily in states that banned Thimerosal without CDC approval. The CDC insists that the drop in autism rates in

since switching to mercury free vaccines is just a coincidence. And what do CDC scientists think of the fact that autism is practically unknown among unvaccinated populations such as the Amish of Pennsylvania and several others?