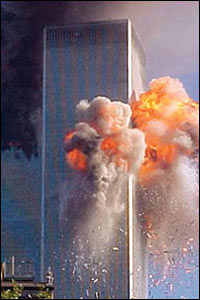 “He hit me!” yells the schoolyard bully as he pummels his victim. He knows it doesn’t matter who threw the first punch as long as no one thinks he did. He knows if you can’t insult your target into striking, you just lie about it. Governments know it too. We all know it. Most of us know better.

No American war in this century has enjoyed majority support before it began. In spite of that, we’ve been at war almost constantly for the last 100 years. Uncle Sam maintains the support of a peaceful people in war after war because he’s mastered the schoolyard bully’s art. He’s always able to show he didn’t strike the first blow.

The American government didn’t invent the war pretext. Government deceptions have justified wars since Roman times. Although rarely enough to start a war by themselves, pretexts are critical to convincing peaceful people they’ve been attacked.

In the last century the U.S. government has evolved the war pretext from taking advantage of accidents to active creation of hoaxes for war.

Spanish America War, 1898
The pretext for this “splendid little war” was the sinking of the battleship Maine in Havana Harbor. The American press blamed Cuban revolutionaries. The Maine’s commander, Capt. Sigsbee, said it was likely the ship accidentally exploded. Ships in those days often did. He was vilified in the press and silenced by his superiors.

Politicians and the press wanted a war. "Remember the Maine, To Hell with Spain!" was their battle cry. Artist Fredrick Remington, working for newspaper magnate William Randolph Hearst, couldn’t find a war in Cuba and asked to come home. Hearst famously replied, “You furnish the pictures, I’ll furnish the war.” Two months later, the Spanish American War began. It ended with quick defeats of Spain in both the Philippines and Cuba. It made Teddy Roosevelt’s political career. The U.S. snapped up the Philippines, Guam and Puerto Rico.

An investigation in 1975 concluded the explosion was accidental.

World War I, 1917-1918
Woodrow Wilson became President by promising to keep us out of war. He vowed neutrality, yet openly supplied Britain with arms and ammunition. On May 17, 1915, the British passenger ship Lusitania was traveling from New York to Britain, without escort at low speed, through waters patrolled by German subs. She carried passengers, freight and six million rounds of ammunition. A German sub took the bait and sank her killing 1,198 people, including 128 Americans. British scheming had created Wilson’s pretext for war.

Newspapers and politicians, once again, whipped up America’s appetite for war and, in 1917, we entered WWI.

World War II, 1941-1945
It would take more than a few dead Americans to get us into another foreign war. Americans remembered WWI with horror. To drag the U.S. into WWII, Franklin Roosevelt needed a spectacular pretext.

Japan’s attack on Pearl Harbor supplied it. If you need an excuse for war a “surprise attack” that kills over 2,000 Americans can’t be beat. But it was no surprise to the president. With the help of broken Japanese codes, FDR and key members of his cabinet knew exactly when and where the Japanese would attack. Historians have shown that not only did FDR know in advance about Pearl Harbor attack, he actively provoked it.

The Korean War, 1950-1952
The pretext for the U.S. invasion of Korea in 1950 was the presumed first strike on 6/25/50 by North Korea against South Korea. The U.S. whipped up U.N. support and went to war against North Korea. Evidence shows it is just as likely the first attack occurred two days earlier when S. Korean forces pushed north.

The Viet Nam War, 1964-1972
The pretext for the U.S.’s first strike against North Vietnam was an attack by a N. Vietnamese patrol boat on the U.S.S. Mattox in the Gulf of Tonkin. That attack never happened. Lyndon Johnson wanted it, even provoked it, but North Vietnam wouldn’t bite. So he simply invented it and began “retaliatory bombing.” The incident was half a world away in the middle of an empty sea and Al Gore hadn’t invented the internet yet. Who was to know?

Panama Invasion 1989
Reports of the shooting of a single soldier and the beating of an American soldier’s wife were enough for George I to invade Panama. Papa Bush declared he “would not stand by while American womanhood is threatened.” Not standing by is one thing, but launching a Helen of Troy style invasion is another.

The Wars in Iraq
The most recent war pretexts have been exposed with embarrassing swiftness. Hoaxes include the removal of the incubator babies in the first Iraq war, bombing an aspirin factory in Sudan, a fake concentration camp in Bosnia, and Saddam’s fearsome WMD’s. Only limits of space prevent listing dozens more. All have unraveled like cheap suits while new ones are tailored for new wars.

The possibilities for a pretext to attack Iran are legion. A nuclear explosion somewhere? In Israel perhaps? A ship sunk in the Red Sea? Use your imagination.

Documents declassified in 1997 revealed a 1962 plan named Operation Northwoods that circulated in Kennedy’s cabinet. The plan proposed (but never implemented) terrorist attacks against American targets. The attacks would be carried out by CIA spooks and blamed on Fidel Castro. They would provide a pretext to invade Cuba. The U.S. government wasn’t sufficiently corrupt at that point to execute the plan.

Nearly fifty years have passed since the Northwoods proposal. I leave it to the reader to decide whether our government has become more or less corrupt since then.

The War on Terror, 2001-????
The greatest attack on American civilians in our history occurred on September 11, 2001. Since that attack the government of the United States has massively expanded its own power and begun what promises to be a never-ending War on Terror.

The destruction of the Twin Towers was a mass murder. Among the many questions murder investigators ask is, “Who benefits?” More than a few who have asked that question about 9/11 have uncovered information that suggests the unthinkable. Knowing how our government has justified war in the past, a close look at the unthinkable, if only to eliminate it as a possibility, is worth taking.