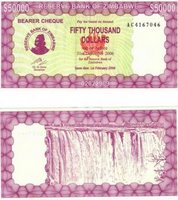 “How Bad Is Inflation in Zimbabwe?” asks the story in the New York Times, as if reporting a volcanic eruption or an earthquake. But hyperinflations are not natural disasters. They are political disasters, and every bit as destructive of human lives as volcanoes and earthquakes.

Zimbabwe’s politicians are pumping up a classic inflationary disaster right now. Prices are rising at nearly 100% a month. The unraveling of the economy in Zimbabwe offers useful lessons to all of us who pass paper tokens around as if they were money.

Zimbabwe is the luckless former British colony of Rhodesia. Its leader, President Robert Mugabe (Moo GAH bay) has ruled Zimbabwe since independence in 1980.

Like other African nations that gained independence from European colonialism, Zimbabwe began with great promise. Like other majority-ruled African nations, tribal feuding, political repression, shameless corruption and outright atrocity have turned a formerly prosperous colony into an independent nation that is fast becoming a hell-on-earth.

The New York Times doesn’t dwell on President Mugabe’s foibles. I won’t either. I’ll touch just briefly on his government’s use of murder, rape, torture, and theft to provide a little background for a discussion of hyperinflationary economic collapse. Wildly corrupt economic policy doesn’t arise in a vacuum. It is part of a larger constellation of corruption. Mr. Mugabe has created the Big Dipper of corruption in Zimbabwe.

Shortly after assuming power the President sent his North Korean trained shock troops to discipline members of a rival tribe in Matabeleland. An estimated 30,000 died. They didn’t support his presidency. What could he do?

More recently, in what he calls “land reform,” the President has confiscated thousands of large commercial farms from their white owners, who in the 90’s had actually paid the Mugabe government for title to the land. Mugabe gave the farms to his supporters and cronies. All his key ministers have at least one. His wife has a few. Bob claimed two for himself.

But the politicians of Zimbabwe are not farmers. They own farms like their more primitive brethren own beads, feathers and bones. The farms are objects of pride, not production. Farm output has collapsed to a fraction of what it was. Food is scarce. Foreign charity is all that stands in the way of famine.

The President’s most recent civic project is Operation Murambatsvina.  In English that’s Operation “Clear Away the Trash.” It is Mr. Mugabe’s greatly simplified version of Urban Renewal. Groups of armed government thugs descend on a dirt-poor slum, chase everyone out, then burn down the shacks. Thousands, who were barely sheltered before, are now sleeping under the stars.

With these government projects as background we arrive at what Mr. Mugabe, straight-faced, refers to as “economic reforms.” This April 28 headline in the Zimbabwe Independent sums up Mugabe’s approach to enduring prosperity: “Government to Print $60 Trillion to Meet Salary Bill.” That’s trillion, with a T, a million million. The smallest bill in circulation is the $500 note. Inflation is running around 1000% per year.

Cases of hyperinflation reveal inflation’s true nature. In all countries inflation is a tax on the economy that works like the crime of counterfeiting. Gain accrues to those who print the new money at the expense of all those who hold the old money. Most politicians and bankers in the civilized world hold this tax to a tolerable level. But the temptation to print yourself rich is often impossible to resist. And sometimes circumstances spin out of control and leave the political class with no choice but to ride a paper tsunami of their own making.

The purpose for which the Zim central bank is printing the $60 trillion best illustrates the point. The mountain of paper will pay the salaries of government workers. Those who print the money use it to buy political loyalty and maintain power. An inflation indexed government job or pension is the only refuge in the paper hurricane. The wealth the political class soaks up with the new paper comes from everyone else. The U.S. government’s colossal commitment to the rapidly aging Baby Boomers comes to mind.

What is amazing is that the economy continues to work at all in an atmosphere of 1000% inflation. But it does. People continue to accept obviously valueless paper for a long time. The Times reports great hardship because of the paper storm, but also found that those who have some way to get the necessary bales of currency can buy whatever they need. For a million dollars each you can buy all the chickens you want. A roll of toilet paper costs $150,000.

Inflations like this always burn themselves out. Eventually no one will accept the paper. A good rule of thumb would be to look for the point where it’s cheaper to use the money than buy the TP. That should be very soon in Zimbabwe. The U.S., on the other hand, has some time left before a sheet of TP and a dollar bill reach parity.

On the positive side, hyperinflations generally end with a change of government. The people of Zimbabwe could hardly do worse.