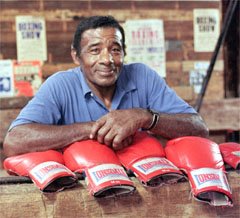 Floyd Patterson looked back at me from the sports page of the Spanish language daily on my kitchen table. In the 1998 photo he was handsome. His face was surprisingly undamaged by 25 years of being punched by large, powerful men. He smiled a wry smile.

The article reported Patterson’s death at age 71. It opened with his greatest victory, the 1960 recapture of the heavyweight championship from the big Swede Ingemar Johansson. I admired the writer for starting with the high point of Patterson’s career. Too many dwell on his defeats. Patterson earned more respect than he gets.

“If it weren’t for boxing, I’d probably be in jail or dead,” said Patterson in the ’98 interview. In that one sentence he explained how he could be a great champion without having been a great fighter. Patterson didn’t fight for love of fighting. Like a junkie struggling to stay straight, he fought to avoid what he would become if he didn’t.

Patterson took up boxing in reform school. He punched his way out of profound poverty and a crushing sense of inferiority. He won a gold medal in the 1952 Olympics as a middle weight. After undefeated champion Rocky Marciano retired in 1956, Patterson beat the aging, but dangerous knock-out artist Archie Moore to become the youngest world heavyweight champion ever — a record that stood until 1986.

Patterson was never as big as modern heavyweights. Speed, not size, was his strongest weapon. He could land six and eight punch combinations in a blinding flash. Launching an attack out of a low crouch behind raised gloves he often delivered the last of a barrage of punches with his feet clear of the ground.

He successfully defended his championship four times against unknown challengers before fighting the flashy European champ Ingemar Johansson at Yankee Stadium in 1959. Johansson had the flash and cockiness Patterson never would. He always traveled with a huge entourage and his voluptuous fiancée. Patterson’s bouts with Johansson probably saved them both from deep obscurity.

Johansson was big. Next to Patterson he appeared to fight in slow motion. But in their first fight he delivered enough big slow punches to knock Patterson down seven times. The referee stopped the match. Patterson had lost his title in an embarrassing upset.

The rematch at the Polo Grounds in

New York was Patterson’s greatest win. Johansson knocked him down twice in the first round. He got back up and put Johansson on the canvas in the same round. By the fourth Patterson was hitting the big Swede at will, punishing his rapidly closing left eye. Johansson took a nine-count in the fifth. In the sixth a crushing left hook struck him down like he’d been hit by lightning.

Even in redemptive victory Patterson waited to celebrate, first kneeling beside his unconscious opponent to see if he was all right. Patterson said later, "He lay there, kicking, I didn’t figure then that he was gonna get up." Johansson did get up. Patterson knocked him out again a year later in Miami.

The reluctant warrior, Patterson later said of his second championship win, "I was so filled with hate. I wouldn’t ever want to be like that again."

He should have saved a little for the thug, Sonny Liston. Liston outweighed Patterson by 30 pounds and had a reach more than a foot longer. Patterson’s manager didn’t want the fight but Floyd refused to deny a contender a fair shot. Showing fans why boxing is divided into weight classes, Liston knocked Patterson out in the first round to win the championship. He did it again a year later.

Patterson was no longer the champ. Now he was just a fighter. He continued to fight because that’s what fighters do. He was past his prime but still a dangerous boxer. His record from his second loss to Liston until he retired was 17 and 4. Among his loses were two to Muhammad Ali and a razor thin, disputed decision for the WBA championship in ‘68 to Jimmy Ellis. A win there would have made Patterson the first three time champion. Muhammad Ali ended Patterson’s career in 1972 with a TKO in the 7th round.

New York Times Herald-Record about Patterson’s retirement in Ulster County. Despite a lack of respect in the boxing press, the locals called Patterson “Champ.” He was a peacemaker during racial violence in the 70’s. He was always available for community fund-raisers. He opened a gym for poor kids from the city. He adopted one of them, Terry Harris Patterson. The victory Floyd would probably tell you made him happiest was when Terry became junior lightweight champion.

Throughout his career and his life Patterson displayed a soft-spoken, polite intelligence that has all but vanished from American sport and American life. The reluctant warrior wore his triumphs and his humiliations with dignity and grace.

Boxing, like baseball, is a sport thick with statistics. Floyd Patterson holds the record for total times a heavyweight champ has been knocked down. When someone told him about it, he said no champ has ever gotten up as many times either.

Floyd Patterson was by no means professional boxing’s greatest fighter, but he will always be one of its greatest champions.

Others On Patterson:
Dan Flynn at flynnfiles.com
Lance Mannion
A Moment With Ted Williams
Brothers Judd
Birdblog
Outside The Beltway
KO Korner