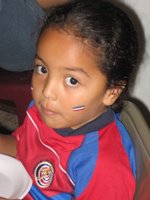 Against long odds, tiny Costa Rica has a team playing in the Copa Mundial, soccer's World Cup. Twenty-five or thirty of us had gathered at "The Friendship Institute" to watch the opening game. We all wore red soccer jerseys and big smiles. The excitement ran high.

Our Spanish tutor had invited us to join a group of locals and gringo Spanish students to watch the big game. He told us to come hungry. There would be a big tico breakfast. Because of the time difference between Costa Rica and the host country, Germany, the game started at ten in the morning.

The age range of the group was from less than a year to over 60, but was heavily concentrated on the sunny side of 30. We ate breakfast with gusto and spoke loud Spanglish over Latin dance music. The meal was typical Costa Rican — delicious coffee, baked plantains, and the national dish, gallo pinto, (literally, speckled cock, but in fact the timeless combo, beans and rice.) A young tica circulated among us painting banderas, little blue, white and red flags, on our cheeks.

Calling the Costa Ricans crazy for soccer downplays their enthusiasm. The national soccer team, nicknamed Los Ticos, was in the Copa Mundial for only the third time in history. It's a HUGE national event. There is no American sports equivalent. The Super Bowl might come close, but even that is a national, not a global, event. And it happens every year. The World Cup, like the Olympics, only comes around every four years.

For a small country of rabid soccer fans the national team playing in the World Cup is at least as important as an election. Winning it would be the competitive equivalent of the Second Coming.

The morning of the game would have been the perfect time for a bank heist in San Jose. The country was shut down. Schools were out. Offices were closed. And for good reason — Los Ticos had the honor of playing the opening game of the Mundial against soccer powerhouse and tournament host, Germany.

The two countries could hardly be more different. David was more evenly matched with Goliath. There are twenty times as many Germans as Costa Ricans. The Germans have played in every World Cup since 1954. They are three time champions. Costa Rica's only other appearances at the tourney were in 1990 and 2002. In their best finish they made it to the second round.

And perhaps in even more telling contrast, while much of the world remains wary of warlike, industrial Germany, it can only marvel at unarmed, unassuming Costa Rica — peacefully honoring its national motto, Pura Vida, pure life, even in the midst of murderous local wars.

The small chance of a Costa Rican championship did nothing to dampen local team spirit. Our little group sang the Costa Rican national anthem with verve and volume, adding a verse beyond the pitifully short rendition at the tournament. They started cheering when the players were introduced and continued throughout the game, pausing only briefly after each German goal.

Soccer chants were nearly continuous after the kick-off. "TICOS, oooohaaaaayooooohaaaaaayoooooohaaaaaay!" rang through the neighborhood. There were half a dozen others I could only get half the words for. They shouted urgent instructions in staccato Spanish to our players, who mostly ignored the advice. They bitterly protested penalties against los Ticos and received those against the Germans with the satisfaction of the righteous.

Less than a minute into the game a German player got off a shot like a cannonball from 50 yards out. It missed by a hair over the top bar but caught the outside of the net. At first it looked like a devastating, impossibly long-range goal, impossibly early in the game. The prospect of a humiliating defeat passed over the room in silence, like the shadow of a hawk over a robin's nest. We bounced back quickly, however, when we realized there was no goal. Chanting and cheering resumed at full volume.

Los Ticos were hard pressed from the start. Heroic saves held the Germans to one goal in the first 30 minutes. The Tico's star striker tied it up when he scored on the only shot the team would make in the first half. I thought the roof would come off the building. The dancing and chanting continued through half time.

The German team was faster and more precise. They had the ball most of the time. The Costa Ricans defended like tigers in the second half and scored a second goal on a lucky break away. The final score was 4 to 2. Goliath was too much for David, but David was no pushover. The defeat didn't dampen the spirits of our little group. Los Ticos had played nobly. They'd done their country proud.

And the Costa Rican fans, with warmth, good humor and spirit of pura vida, had once again shown their gringo guests what their country shows the world all the time.

If you can't always win — you can deserve to win.