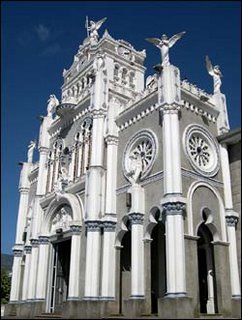 The
day breaks on August 2 here in San Jose, Costa Rica with brass bands
blaring and fireworks booming. The pilgrims who have filled the roads
for the last few weeks have mostly arrived by now in Cartago, a city
about 15 miles east of San Jose.

Cartago
has three times been destroyed by the volcano that looms above it and
three times rebuilt, most recently with one of the finest churches in
the land. Pilgrims have come by the thousands from all  over the
country, walking, riding horses, or motor scooters and even running
marathon style.

They come to honor the country's  patron saint, La Negrita, the  little black one, the Virgen de los Angles.

The  holiday stems from a legend of a miracle that began on August 2, 1635. A woman  collecting firewood found a small dark stone standing atop a larger stone in the  woods. Looking closer, she saw that the small stone was carved with an image of  the Virgin Mary with Baby Jesus in her arms. The woman took the image home and  put it in a basket.

The  next day she returned to the same place and found a carved image of a snake on the same stone in the same place. She brought that one home too. She went to put  it in the same basket as the first image, but the first one was gone. She locked  the remaining image up so that no one could take  it.

She  returned a third time to the place in the woods and found the image of the  Virgin Mary on the same stone again. She took it back home only to find that now  the snake was gone.

At  this point, the town priest was brought in for a consultation. He took charge of  the image but nothing changed. The image continued to disappear and reappear  where it had been found. After the stone was placed in a locked box in the  church and once again returned to its perch in the woods, there was nothing to  be done but to build a basilica to house the miraculous image where it was so  determined to be. The legend doesn't say what happened to the stone snake.

A  Basilica was built on the site where La Negrita was found. Inside  the Basilica is a shrine to La  Negrita, where the stone is displayed on its own altar. The chamber  is festooned with trinkets and small gifts, many small gold or metallic images  of body parts cured through the intervention of La Negrita.

Many pilgrims climb the church steps  on their knees, giving thanks for favors granted or praying for favors to come.  Visitors also pray by the stone on which La Negrita was originally  found and collect water from the stream near the shrine, which is said to have  curative powers.

In  2003 the official count of pilgrims to Cartago was over 1.5 million. That's over  40% of the population of the entire country, and well over half the adults. Such  a celebration and display of faith has no North American  equivalent.

Costa Ricans are tolerant of other  religions but according to the 1949 Constitution, Catholicism is the official  state religion. The Catholic religion is taught in the public schools and over  three quarters of the population considers itself Catholic. Although only 40%  admit to active practice, more than that show up every year in Cartago to make  sure La Negrita hasn't  disappeared again.

This writer received Catholic  training when young, but comes from a much more casual Catholic tradition where  religion is not unlike dandruff — every one has a little, spends some time and  money on it, but otherwise doesn't think very much about it. The depth of faith  and devotion that brings barefoot pilgrims hundreds of miles on foot and drives  them to their knees to ascend the steps of the church is a marvel to me not  unlike the mysteries of La  Negrita's miraculous disappearances.