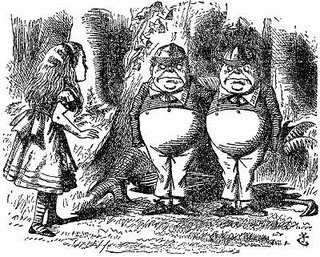 The Tweedledee party just won control of Congress while the Tweedledums still have their man in the Oval Office. I suppose, as an opponent of the fraudulent War on Terror and a great fan of the Constitution, I should be gratified. Many Tweedledee supporters are pleased as punch and seem to think some important changes will come of their newfound power. But I suspect that while the beneficiaries of the War on Terror scam will probably change, the shabby nature of the undertaking will remain the same and the damage it has done to American freedom will go unrepaired.

Since the events of 2001, the ruling Tweedledums have played havoc with what remains of the US Constitution. If any good came of the Constitution’s further destruction, it was a sudden, uncharacteristic reverence for the document by the Tweedledees. In control of Congress they are now in a position to act on their new respect for the Constitution. Somehow, I doubt they will.

Some obvious choices for at least a partial restoration of our lost rights would be a thorough criminal investigation of the events of 9/11, the repeal of the USA Patriot Act, and the repeal of the many recent laws allowing the secret lockup of the innocent, illegal eavesdropping, surveillance, and torture. A repeal of the Military Commissions Act of 2006 alone would restore much of the effectiveness of the now forgotten Bill of Rights.

While the Tweedledees are at the job of restoring American liberty, they might also consider repealing the Real ID Act, a law that will have us all numbered and tracked like barnyard animals starting sometime in 2007. And of course, doing away with the ever creepier Department of Homeland Security and its army of airport granny friskers would greatly revive American rights and dignity without appreciably increasing our risk of death by terrorism. It would also save billions in wasted taxpayer dollars, millions of hours of shoe removal and strip search time and who knows how many tons of discarded toothpaste, deodorant and KY jelly.

I doubt very much, however, that any of these ideas have occurred to the new majority in Congress. In fact, the new Speaker of the House designate, Nancy Pelosi, said nothing about the death of the Constitution or our lost rights at a press conference after the elections. Instead she immediately set off my BS alarm by telling me how honest the Tweedledees were going to be. I instinctively mistrust people who feel compelled to tell me how honest they are. Pelosi said: “Democrats intend to lead the most honest, the most open and the most ethical Congress in history.” Not that that would require any great level of honesty or candor. Does that mean we can expect the Clintons to return the stolen White House furniture in a gesture of Tweedledee integrity?

Pelosi went on to outline a “First Hundred Hours” plan. The plan had nothing to do with the restoration of the Constitution or ending the war in Iraq. Instead the Tweedledees plan to reform lobbying, implement some 9/11 commission recommendation, increase unemployment with a hike in the minimum wage and buy more votes from young and old alike with drug benefits and student loan interest rate cuts.

Many Americans viewed this election as a referendum on the war in Iraq; apparently Ms. Pelosi didn’t, saying only that she wants to work with Bush on a "new direction" on Iraq. A “new direction” in Iraq would imply that the whole murderous enterprise already has some identifiable destination. It would imply possibilities in Iraq that don’t involve the further humiliation of the most powerful army on the planet by malcontents with home made bombs and the further wholesale murder of Iraqi civilians by Iraqis and Americans alike. I can’t think of what that direction might be.

Now that the Tweedledees have some power they will do nothing to reduce the power of the government they control. Instead they will savor and hoard it to gain more in the next election. Our troops will remain in Iraq. Their blood and our freedom will be further sacrificed to unseat the Tweedledum president in 2008. Should that occur, as it very likely will, every potential Tweedledee president, including the ruthlessly ethical Hillary Clinton, has promised to expand the war on terror. And why not?  Nothing appeals to politicians more than massive government projects and what government project could possibly top a perpetual global war against an invisible enemy.

The lyric from the Who’s song We Don’t Get Fooled Again keeps repeating in my head: “Meet the new boss, same as the old boss…”