Yesterday Mike Moreland shockingly passed away and the Liberty Community in Kentucky has been grieving his loss. Mike was a Boone County Magistrate, and anyone who knew Mike knows he did not get into politics because he was in it for himself but his county, state and country. Mike’s role went far beyond being a county magistrate he was a die hard activist for liberty and the constitution long before the TEA Party came along, working with people and organizations like Norm Davis and Take Back Kentucky. Mike was active all across the state but especially so in his home region of Northern Kentucky and in the NKY TEA Party.

When I first entered the Liberty Movement shortly before the TEA Party took off Mike was one of the first people I met. He along with others were there ready to mentor a whole new bunch of liberty activists and freedom fighters. Mike was always willing to help, be a positive influence, and impart knowledge. At just about every event you would find Mike spreading the message and meeting people. He was a comfort to have around, because honestly this thing took off fast and a lot of us did not know each other, and I see people like Mike as the glue that holds organizations, networks, movements and people together.

However, we have not just lost a great grassroots activist, we lost a friend that always had a smile for you and a twinkle in his eye. My sympathies along with I am sure everyone else in the Liberty Movement, TEA Party, and Conservative circles go out to his family, friends, and loved ones at this most difficult time.

I will end with this, Mike was in this movement for quite a while, he was there to take people under his wing whether they were new in youth, knowledge or experience to help continue it. I know this can get hard and draining at times and may even seem hopeless, but Mike kept going. I say we all do the same and be ready for the next wave of people ready to make a difference like he was and did. That should be how we honor him, is to never give up and live life to fullest.

If you wish, please share your memories and thoughts about Mike Moreland here. 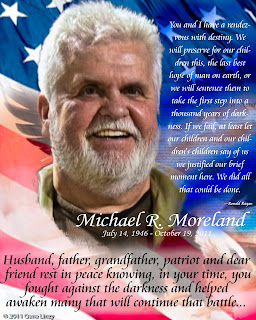