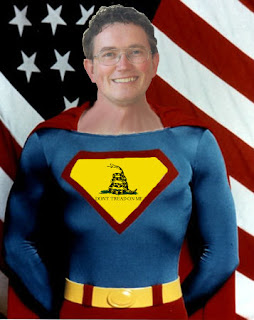 Ready to defend truth, justice, and our Constitution!

When the dust settled, the darling of the TEA Party, the overwhelming favorite of the burgeoning liberty movement, and the friend of the rock solid fiscal conservative base of the Republican Party in Kentucky won handily over the establishment candidates, Alecia Webb-Edgington and Gary Moore.

The mood was very festive at the Thomas Massie victory party, with huge cheers every time the big screen TV flashed up the latest election returns, which consistently showed Thomas in the lead over Alecia Webb-Edgington and Gary Moore, by a decisive 45-29-15 margin.

Expect some savvy political analysis to conclude that the establishment Republicans will learn not to run two establishment candidates against a TEA Party candidate, but you don’t need a master’s degree in engineering from MIT to realize that even if Moore had dropped out and every single one of his votes went to the other establishment candidate, Alecia Webb-Edgington, Thomas Massie would have still won the race… at least based on the 19 of 20 counties reporting at the time this blog went to press.

My favorite part of the evening was Thomas’ victory speech.  I usually don’t enjoy these, as the candidates are exhausted from the stress and insane hours of a long and hard fought campaign, and even those who are natural public speakers gush a bit and then fall back on the same trite and shop worn talking points that could as easily have been uttered by their primary opponents.  Not this time.  Thomas referred to the TEA Party several times.  Even more amazing was the way he specifically called attention to the liberty movement as an entity distinct from the TEA Party on each of these occasions.  Knowing this distinction was too subtle for the clueless mainstream media by four orders of magnitude, he called their attention to it and almost dared them not to cover it.

Thomas also specifically called out the establishment.  He wasn’t petty or rude about it, but he certainly wasn’t pandering to them either.  It was clear that he wanted everyone to know this was a win for liberty and a repudiation of RINO establishment politics as usual.  He certainly wasn’t simply pandering to the TEA Party and liberty loving crowd at his victory party either, because he disparaged the political establishment while the seven or eight TV cameras were filming.  His comment was very much a public statement, zinged in the direction of the Republican establishment.

If there was any doubt that this was TEA Party versus The Establishment, that doubt was put to rest.

The official festivities began with congratulatory comments from US Senator Rand Paul, delivered via Skype.  Rand wasn’t shy about going full court liberty, either.  There was a decided feel of a liberty revolution in the air, and there was talk among the crowd of forming a liberty caucus in Kentucky.

Thomas Massie’s race was sold as Rand 2.0, and it certainly felt that way tonight with the big Thomas Massie win.

However, Thomas wasn’t the only liberty candidate to post up a win tonight.

I’d like to give a big shout out to my friend, Chris Hightower, who pulled off a 53-47 win over his Republican primary rival in the battle for Kentucky’s 16th House seat.  We’re all behind you Chris, and we’ll be there to support you in the uphill battle against the incumbent Democrat in November.  Many of you remember Chris Hightower as the first person Rand hired to help with his US Senate race.  There are little brush fires of liberty popping up everywhere!

There were some liberty and TEA Party losses, as well.

Kelly v. Barr – In the KY-6 congressional race in central Kentucky, establishment favorite Andy Barr pulled 83% of the vote, and the liberty candidate, Patrick Kelly received 12% of the vote.  That’s not as bad as it sounds.  Andy Barr was the front runner in that race two years ago, and has for the most part continued campaigning ever since.  He had all of the money and all of the name recognition.  Patrick’s 12% is very impressive when we consider that A) he’s 26 years old, B) he ran on almost no money, C) he only started campaigning two months ago, and D) his yard signs had his name in small print and most of the sign real estate was devoted to some sort of Rorshach ink blot test to promote his unconventional (to say the least) I Like Beard website.  Many people thought the beard looked like a manta ray, a dog bone, etc., but a lot of people liked Patrick’s message, which really wasn’t that different from Thomas Massie’s message.  There’s no doubt that Patrick easily beat Andy Barr in terms of votes per dollar.

Polston v. Girdler – From what I’ve heard, Chris Girdler is running in Kentucky’s 15th Senate district, on the very well funded coat tails of Hal Rogers, and he prevailed over Mark Polston, 50-40.

All of the above TEA Party and liberty races were in Republican primaries, with many of the candidates more liberty leaning than TEA Party leaning, although there is certainly a lot of overlap between the two factions.  However, there was an interesting Democratic primary with a TEA Party candidate.

Win lose or draw, I’d like to express my sincerest appreciation to all of the TEA Party and liberty candidates who ran for office this year.  Thank you for standing up to the establishment political machine that has brought our country to the brink of disaster.  We need good candidates to represent the people, by upholding the wise and noble principles conveyed in our Constitution.  As Thomas Massie observed in tonight’s victory speech, if we simply followed our Constitution, we wouldn’t be in this big mess.

If you’d like to see the results of any other races in Kentucky’s 2012 primary, the best place to find all of the official results in one place is the election results page on the Secretary of State’s website.

There was one final race worth mentioning that didn’t have any TEA Party or liberty candidate.  Our incumbent president Barack Obama pulled off a narrow 58-42 victory over Uncommitted in Kentucky’s Democratic presidential primary.

Q: What could possibly be more embarrassing than that?

A: When Mitt Romney loses to this Obama joker in November.

How’s that lesser-of-two-evils voting thing working out for you?

The real news tonight wasn’t news at all.  It’s a familiar theme.  If the Republican Party wants to win, they need to run better candidates.  That means no more RINOs or career politician hacks.  Run candidates who balance budgets and respect individual liberty and free market economics.

UPDATE:  Here’s Thomas Massie’s excellent 17 minute victory speech.  By my count there were six references to our Constitution, nine mentions of liberty, eight references to the TEA Party, and Thomas directly called out the political establishment (career politicians, elite) seven times.  There were also numerous references to fiscal conservatism.