From the outset, the TEA Party has viewed Thomas Massie’s race as Rand 2.0, with good reason.

The vitriolic attacks from Gary Moore and Kevin Sell (Alecia Webb-Edgington’s agent) are Too Kooky For Kentucky 2.0.

That attack didn’t work the first time and we now have Rand Paul in the US Senate, working hard to restrain the growth of government and curtail deficit spending, instead of another establishment RINO who simply talks about these conservative values when running for office and then falls into lock step with the Big Government Machine in DC once elected.

Kentucky voters are seeing through this charade.

Sure, there are some people who will believe the desperate lying attacks of Gary Moore, but most voters see through his attempt to detract from Thomas Massie’s well earned TEA Party support.

The election math is fairly simple.

Gary Moore is counting on his establishment support, so all he needs to do is peel off some votes from the large and growing electorate that leans toward the TEA party.

However, his attacks are so obviously untrue, so desperate, and so vicious that they lose all credibility, even among casual observers.

These desperate and baseless attacks are actually good news for Thomas Massie.  When everyone is ganging up on him with attacks that are completely without substance, it’s obvious that they’re desperate and running scared.  It’s also obvious that they have no factual attacks or they’d be using those instead.  They must have internal polling that shows Thomas Massie in the lead, and probably with the momentum advantage.

Thomas Massie has been THE choice of the TEA Party from the start.  Trying to convince people that he’s not is a fool’s mission, and frankly, quite lame.  As shameful as it is for candidate Gary Moore, it’s even more shameful for 4th district Republican Chairman Kevin Sell.  I thought the district chairman was supposed to remain neutral throughout the primary?  The Republican establishment brought back Sell to fill that position when Alecia Webb-Edgington vacated it to run for Congress.  To outsiders, this might be seen as an attempt at fairness and impartiality, but it’s now clear that the only reason to do this would be to generate more credibility when Kevin Sell was stumping for Webb-Edgington than she could ever garner campaigning for herself as a party official.

The Liberty For All Super PAC dropping over half a million dollars into advertising for Thomas Massie was huge, and really took the establishment by surprise.  They don’t know what to do, so they lash out in fear and frustration.  Sucks to be outspent five to one, doesn’t it?  The shoe is on the other foot this time and the establishment is crying like a baby. 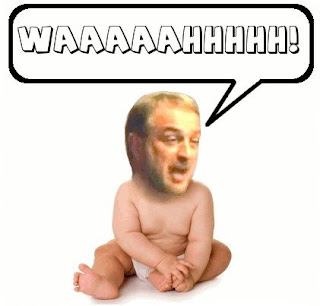