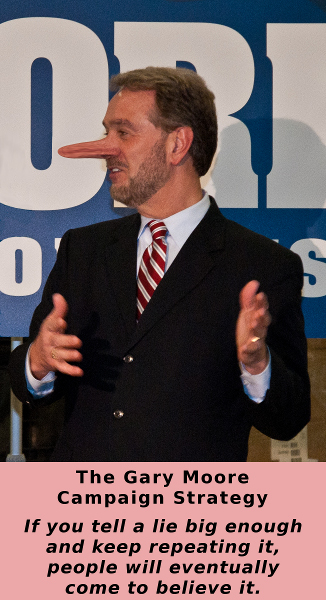 I called my 80 year old mom on Wednesday night and she told me that she had received one of those political mail pieces from Thomas Massie and it didn’t make any sense.  She read a few fragments and I quickly realized what it was, and she confirmed it when she read, “Paid for by Moore for Congress.”  It was the mail version of the same lies that Gary Moore’s campaign has been airing on cable TV ads.

The televised ads were so inaccurate that cn|2 Pure Politics, the news channel of Insight Communications where the Moore ads were being aired ran a news story entitled, “New Gary Moore Ad Takes On Thomas Massie Over County Budget – But Is The Claim Accurate?”  In short, the cn|2 Pure Politics article exposed the cherry picked data that led to the ad’s false conclusion.

This is Kentucky.  We expect campaign ads to torture and abuse the truth, and distort it to fit their mud slinging message, but the Moore campaign’s attacks on Thomas Massie have crossed the line into utter fabrication without a tincture of truth.  The Moore campaign is desperately trying to confuse my 80 year old mom and others like her.  It’s so shameful that I feel ashamed for them, because apparently they’re all so steeped in politics that they’re incapable of feeling shame or remorse.  They only know what is politically advantageous.  Haven’t we had way too many of these creeps in Congress?  In fact, doesn’t that DEFINE what is wrong with Congress?

A couple of weeks ago, I thought the Republican establishment had chosen Alecia Webb-Edgington and would force Gary Moore to exit the race to avoid having these two candidates split the non-TEA Party vote.  Instead, they took the low road.  Gary Moore stayed in as their attack dog.  He slings all of the muck he can at Thomas Massie.  There’s not a scintilla of truth to the vicious lies, but if you chuck a stick of dynamite into the outhouse, there’s gonna be a big stink.

Moore’s negative liar ads essentially tear down Gary Moore and Thomas Massie, leaving Webb-Edgington to sail by unsullied.  It’s so diabolically evil that I wonder if the strategy wasn’t hatched by Karl Rove.

Rand Paul had to endure similar unfounded attacks by the establishment that wants nothing more than to appoint another one of their RINO stooges to deliver more of the big government tonic that’s killing our country.  Fortunately, Rand had the money to respond to those baseless attacks and set the record straight.  Hopefully, Thomas Massie will be able to respond to the lies with truth as well, with a loud enough voice that the voters understand how they’re being conned into maintaining the politics-as-usual status quo – in short, voting against their own interests.

The TEA Party needs to punish not only the liars, but the entire establishment that’s running this crooked game.

Senator Dick Lugar was soundly tromped in the Indiana Republican primary this week by TEA Party candidate Richard Mourdock.  Not unexpectedly, Lugar gave a whiny cry baby concession speech and lashed out at the Republican who had bested him in the primary despite the advantages afforded to Lugar by his 35 year tenure in the US Senate.  As fellow neocon Bob Bennett can attest, we’ve entered into a TEA Party political climate where being a career politician is more of a liability than an asset.  It’s about time!

The TEA Party in Kentucky is the vocal minority but most Kentucky voters are leaning heavily in the same direction.  As big government run by the Two Parties That Are One fails us to an ever larger degree, We the People are waking up and realizing that voting for the party’s anointed candidate or voting for the candidate endorsed by another career politician is not the answer we need.

In Kentucky, we need to send Thomas Massie to represent us in DC.  He’s not doing it for the money or the power.  He’s not participating in the lucrative congressional pension plan, nor is he taking advantage of the generous congressional health care plan which is vastly better than the ObamaCare they’re trying to foist off on us.  Thomas wants to go to Congress for all of the right reasons.  They’re the same reasons that compelled him to run for Lewis County judge executive.  They’re reasons that We the People can understand.  He wants to fix the problems by ending the waste and corruption.

Such worthy candidates are rare and the TEA Party needs to support them if we’ll have any hope of restoring our once great republic.  Speak out to your family, friends, and coworkers.  Educate them.  Make sure they know the truth about these candidates so they can vote accordingly.  Your endorsement will count a lot more with your mom than anything that any politician could say, or any lying ad that may be shamelessly run on TV or mailed to easily confused little old ladies.

We still have a week and a half to go.  It’s limbo time.  How low can they go?  What other shameful tactics can we anticipate? 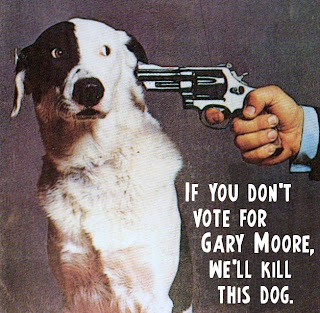