The Republican Party of Kentucky neocon establishment told you to vote for Williams & Farmer in last year’s gubernatorial race.  Their establishment candidates lost the general election by a humiliating 21%, and Richie Farmer is now under investigation for numerous felonies stemming from outrageous abuses by an elected official that are egregious even by the standards of corrupt Kentucky politics.  Now these same people are telling us that we must vote for Mitt Romney, even though there is no substantive difference between Mitt Romney and Barack Obama.  In case that news is so shocking that your mind is reluctant to accept it, let me do the math for you.

Still don’t believe me?  Hear both candidates in their own words.

There’s no real chance that Romney will win if the inevitable economic calamity can be forestalled past November, just as we were never in any danger of Williams and Farmer winning.  The danger lies in allowing the GOP oligarchy to pick one candidate and the Democratic oligarchy to pick another candidate in their Two Parties That Are One race to the bottom to see who can pick the worst candidate, as we all go to the ballot box and once again are forced to choose between the lesser of their two evils.

There is no chance that the Democrats are going to nominate anyone but Barack Obama, so the only chance is for the Republicans to nominate a much better candidate.  In Kentucky, We the People need to stand up on our hind legs and tell the Republican Party of Kentucky that we have “Massachusetts moderates” here in Kentucky.  We call them “Democrats”.  Pick a fiscal conservative instead of a flip flopping neocon… or we’ll all lose again. 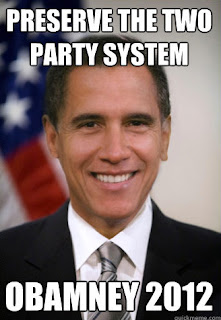