I’d Like to Report a Crime: Predatory Law Enforcement

I witnessed an armed robbery in broad daylight. The thieves were bold, armed, wore no masks, didn’t hurry. They weren’t afraid of being caught. Although, it turned out they sure didn’t want anyone watching.

The Herald-Leader reported this robbery. They got a couple of facts wrong, starting with calling the looting of a retail store an “enforcement action.” To the handful of us recording the siege, it was hard to distinguish this “enforcement action” from a 7/11 smash and grab. 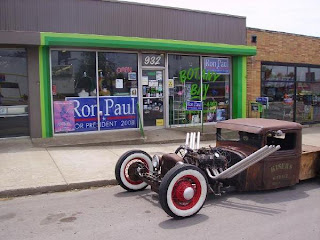 I arrived just after nine grown men had swarmed into the Botany Bay on Winchester Road. After they handcuffed the four young unarmed employees, aged 18 to 24, the looting began.

Much of it is on video shot through the front window. The entire raid would have been recorded except that the first thing the vandals did was rip out the security cameras. (They also stole the modem and router. Why? Did they feel compelled to further punish the tax-paying law-abiding business owner? They appeared to be all in for that enforcement action.)

The safe was open so they took the few hundred dollars there. They must have been disappointed they didn’t get to actually break into the safe because they destroyed it anyway.

Although the warrant was for alleged contraband that would have fit into a Sponge Bob lunch box, the team arrived with their own large packing boxes into which they deliberately dropped fragile glass merchandise wiped from the store shelves. No bubble wrap. As boxes of glass were taped shut, other heavier boxes were dropped on top of them.

When asked if they were taking an inventory as required by law, they answered, “No.” They seemed pretty pleased with that answer. Only one alleged cop identified himself by name, yet refused to show any credentials. No one wore a badge except a lone uniformed officer. The rest of the gang were dressed in either street clothes or SWAT gear.

Way cool expensive SWAT gear at that: ballistic vests and Black Tees with POLICE written across the middle, mace, tasers, special “tactical” gloves and cuffs, an array of spiffy black “special ops” equipment. One dude wore two pistols Jesse-James style, tilted at a rakish angle for quick access. I’m sure that’s completely necessary here in Lexington, what with our violent crime wave and all.

“Enforcement action” presumes the enforcement of a law. Those charged with enforcing our laws are public employees.

It appears we have completely failed in that respect.

The attitude of the public servants looting the Botany Bay was one of smug, smirking,

untouchability.  We asked one guy, “How do I know you’re a cop?” He answered, “You don’t,” visibly pleased with himself.

The longer our video cameras were pressed against the front windows, however, the fewer of our brave crimefighters could be seen. One by one, they slipped into the back room, out of sight, taking their bravado with them.

Were they ashamed of their behavior? Ha. I doubt it. More like annoyed at being caught. They told the handcuffed boys that the witnesses “weren’t helping” their situation. Really? The only situation harmed by witnesses was unfettered looting.

The cops also asked the boys to identify us. The cops would not identify themselves, would not show their badges, but they wanted to know our names.

The fact is this search warrant could have been conducted by two police officers and the aforementioned lunch box. Instead, these guys came en masse, dressed to intimidate, equipped to steal. Undercover cops visit the store all the time. They knew there was no danger presented by the kids who work there.

When challenged on their thieving, one of the officers responded: “When police take stuff, it’s called seizure.”

Seizure is the defining aspect of predatory, profit-driven law enforcement, where the enforcers get a cut of the loot they swipe from their victims. Coincidentally, the Institute of Justice just released an informative podcast: Policing for Profit. Predatory law enforcement is a huge problem in the U.S., not just in Kentucky.

Real police involved in real law enforcement — law enforcement that protects us — have nothing to hide. These Lexington cops became, by definition, “secret police”: a roving gang of armed enforcers encouraged to operate just outside the law, dispensing justice by vandalism.

“Secret police” are anathema to a free society. Infamous for abusing their own people, Nazi Germany’s gestapo, the post war STASI in East Germany, Soviet Russia’s KGB, and other innumerable gangs of state-sponsored thugs have terrorized peaceful people the world over.

It can’t happen here? Clearly, it already is. And has: Prohibition. Prohibition ended when we’d finally had enough with the corruption, murder and mayhem.

This is the new Prohibition: gangs of cops break into your property, take your children and “seize” all your valuables to protect you from smoking pot. Your life is destroyed, but at least you aren’t on drugs!

Here’s the question we should be asking: who benefits?

(Hint: who is getting the loot?)

At the end of the day, the cops drove off in two trucks loaded with 40+ boxes of merchandise. So far, it looks like $100,000 worth. None of the boxes were labeled. “How will you know what belongs to the Bay when you get to the warehouse? Where is the inventory?” we asked. Our questions were ignored.

Is this how a lawful seizure is conducted? Is there such a thing?

Whether or not you like what the Botany Bay sells, it sells only legal products to consenting adults, just like a liquor store or tobacco shop. Nothing they sell is lethal or even mildly dangerous. Whiskey and Pall Malls are verifiably dangerous… but those shops haven’t been raided since Prohibition.

More importantly, the Bay’s owner is breaking no laws. Yet, she is allowed to be persecuted at the hands of law enforcement without the least bit of due process.

When a law-abiding small business owner is allowed to be abused by local peace officers, we are all in trouble. Serving a warrant is one thing. Confiscating illegal merchandise is one thing. Making an arrest is one thing. Nameless thugs vandalizing our property, stealing from us and enjoying it, that is something else entirely.